Written by Aksana
Back to listings
18th August 2021

As part of the co-curated events programme which celebrates North Birmingham’s reputation of intergenerational activism, Black Heritage Walks Network and Overhear will be creating a new cultural walk in Handsworth exploring migrant communities who settled in the Handsworth area. The audio trail version of these local stories will be told by local residents and found on the Overhear app.

How did you all first meet?

Garry: With Black Heritage Walks, we’ve known each other from around the circuit as you know the Caribbean community is quite tight in Birmingham. We all met through Black history month events in Birmingham.

Tom: OK so with Overhear… the truth is that all three of us have not met all together in person… This is a full on pandemic adjusted team!

Just to expand on that, has the pandemic taught you something about yourself that you hadn’t quite realised?

Tom: We need to take an aerial view of many of the systems we are involved in, step outside of them and perceive a different future from the one that we’ve got coming.

Garry: I think the pandemic taught me how hard I actually work trying to actually raise our community. I’ve always known that this is my interest, I think it’s the fact that the pandemic has allowed us to have more time…When the world stopped, because that’s what Covid did, people really realised that they had a minute to stop and think and engage in ways that they hadn’t done in a long time – to reconnect with people that they hadn’t spoken to, and people were just searching for entertainment and value and how to keep their minds active.

We’re always looking for entertainment – w​hat are you currently obsessed with?

Garry: I’ve just received a book from America, “Sisters in Arms” which talks about African American service-women who were based in Birmingham during World War 2. The actual author sent it to me directly so I’m looking forward to reading that.

Tom: John Verveake’s Lecture Series “Awakening from the Meaning Crisis.” He looks at how we’ve made meaning from things throughout history starting with Shamans embodying animals on the hunt up to Socrates, Plato and Aristotle (that’s as far as I’ve got so far anyway).

Garry – from doing all of the walks, what’s the coolest fact you’ve learnt about Birmingham?

Garry: Ok, so not a single fact but what I’ve learnt myself is how much history there is in Birmingham that just really hasn’t been talked about. It’s tough to pick one, but one of the coolest facts is the fact that Nelson Mandela, Muhammad Ali and Malcolm X have all visited Birmingham.

Tom – there’s a lot of pins on the app already! From doing all of them, what’s your most memorable project?

Tom: The first project I did. It was with Verve and that was a big introduction to many poets for me as a songwriter and many of those have stuck with me. Bohdan Piasecki’s in particular. 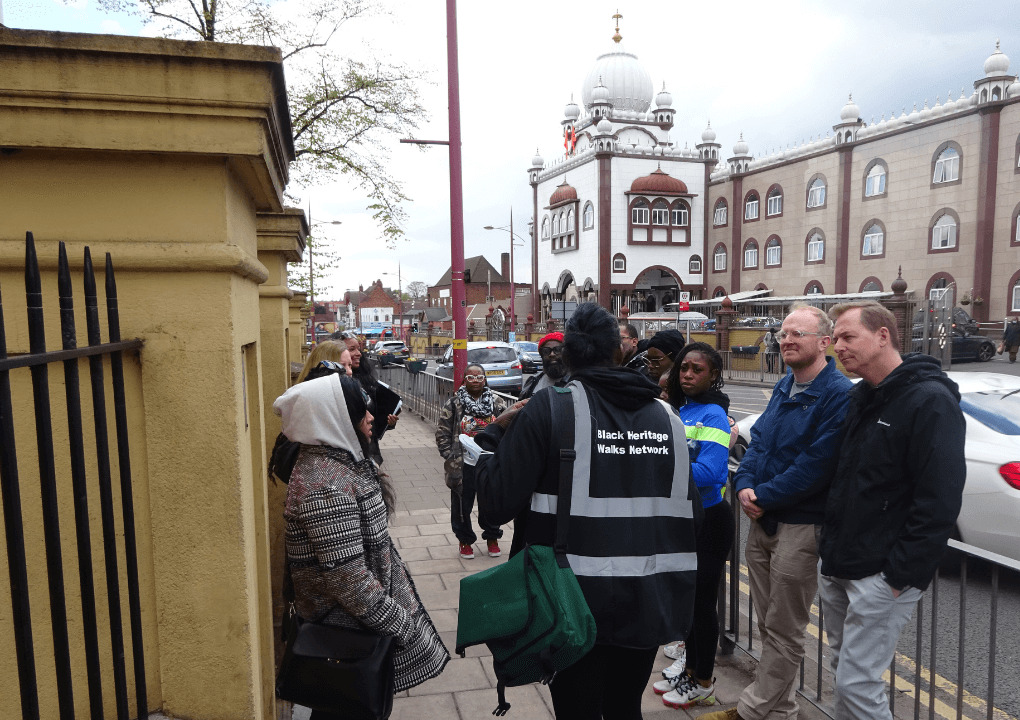 We’ve got walking, we’ve got apps – in your own words, what are you both doing together with China Plate?

Tom: We have plans to create an audio trail of these local stories. They’ll be specific to places in Handsworth and told by local residents.

Garry: We’re excited to hear stories from people to bring to life the many characters who lived within the area! We want the walk and accompanying audio trail to be a celebration of their trials and tribulations to become fellow Brummies.

Tom: You’ll be able to find all this on the Overhear app too. We’re available on Google and Apple App Store.

During the Block Party, you both will be doing a workshop. And you’ll be doing a mini tour of the area. So what pro tip would you give to anyone who is going on your walk?

Garry: I would say to people to come with an open mind. Just because you live in a place doesn’t mean you know it! And it can be quite fun to learn stuff that people have just forgotten about. And the other thing I’d say is, it might be cold or wet, but why not still come and enjoy it?!

What brought you joy today?

Tom: There’s this open source 3D design software called Blendr that is excellent and I’ve been having lots of fun with it.

Garry: I’ve just connected with a friend whose birthday it is, so it’s just been nice to catch up.

If you’re Birmingham based, or fancy a trip to the West Midlands, we’d love you to join us on Saturday 28 August at Soho House for our Bus Boycott Block Party! A free family fun day out inspired by the landmark 1963 Bristol Bus Boycott.

For more information and to book tickets, please visit our event page.